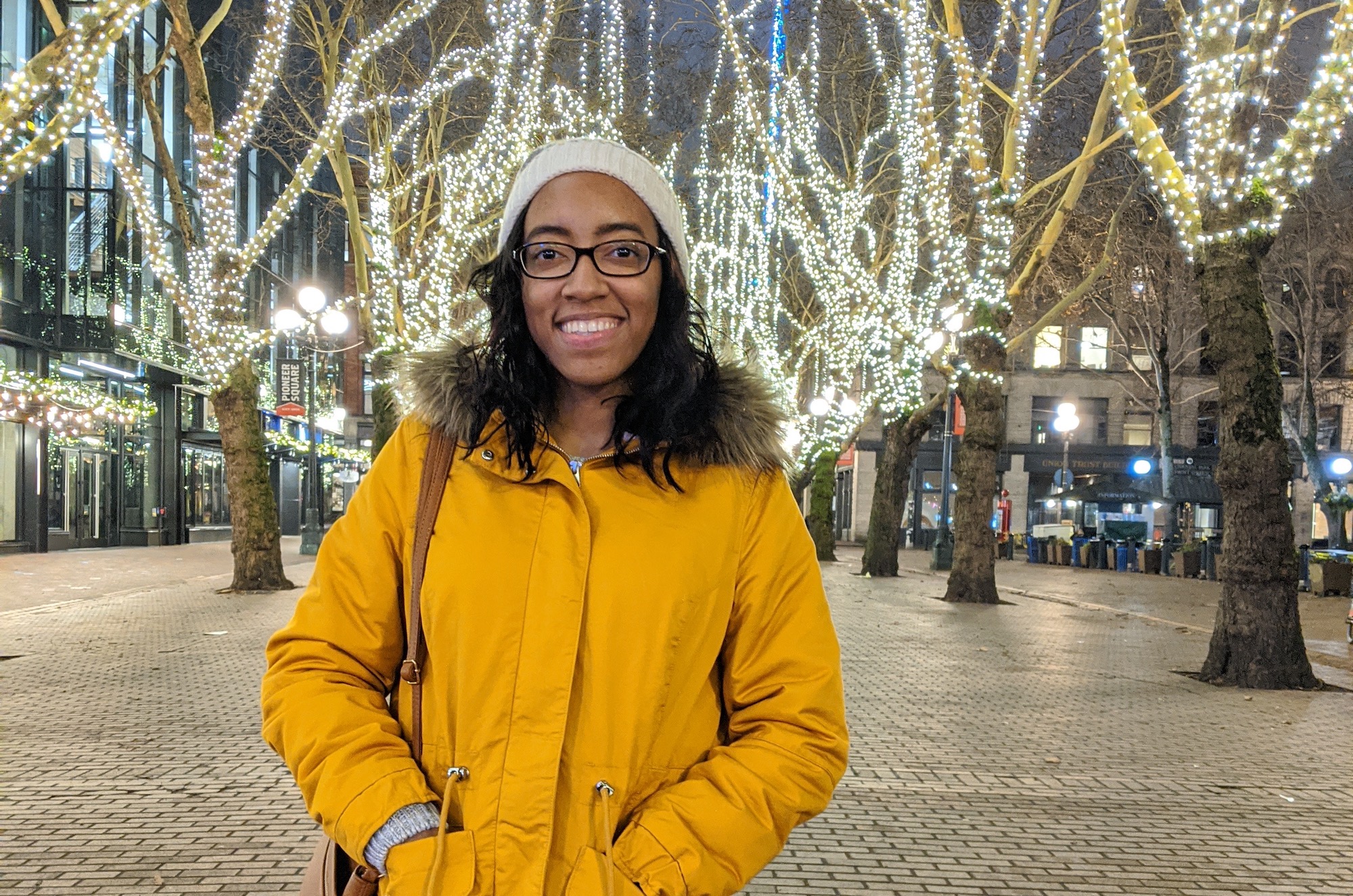 Meet Tori, an internal communications specialist for a credit union who lives in Seattle, WA.

I’ve been in Seattle for just over three years and I love the nature and outdoorsy lifestyle that’s available here. Being so close to the mountains and water always inspires me.

I have my own studio apartment, but my lease is up in June, so I’ll have to figure out where I’m going to move to next. I know some of my rainy day fund will go toward my move this summer, so I’m preparing for that.

I manage internal communications for a credit union, and I dabble in freelance writing—specifically, music journalism—on the side.

I got into music journalism in college. I’ve always loved instruments and the arts in addition to writing. I realized that I could combine music and writing, so I started doing interviews on my own music blog, Between the Notes.

After graduating college, I started at Amazon full-time and worked for City Arts Magazine as a freelance music writer until City Arts closed due to funding issues. Unfortunately, the magazine had to close near the end of 2018 because of a lack of funding. They really tried to keep on going until they ran into financial issues.

My new job does not pay as much as my previous one, and the rent in my new apartment is higher than what I was paying before, so I had to make major adjustments to my budget to live without barely scraping by.

Did you learn any money lessons growing up?

When I was younger, I would receive loose change every week for my piggy bank or get rewarded monetarily for good grades on my report cards.

My parents actually let me make decisions with the allowance I received in my piggy bank. They helped me understand the difference between a need and a want. I also grew up rolling coins for the bank with my grandpa’s help. He would lecture me about finances, and I used to think it was the most boring thing, but now I see the value in what he had to say about money.

What do you think the value of money is?

My grandpa shared with me the envelope method. He’d divide his budget into physical envelopes: groceries, entertainment, etc. I thought it was inconvenient when I was younger, but as I’ve grown up, I realized that I do that digitally. With the envelope method, you can see where your money goes as well as see the value of saving versus how much you spend.

I’ve learned the value of saving so that when I want to buy something, the money is there.

I like to set concrete saving goals. When I was unemployed last year and finally moved to be closer to my new job, I had to live off my savings for a while. I definitely had to budget during those times. I’m more disciplined in savings when I have a concrete goal.

I hit the $5,000 goal I made for myself in six months, which is earlier than I thought I would. Originally, I didn’t think I’d reach my goal for a year. Now I’d like to try and save an additional $1,000 in my savings account by June.

How’d you reach an ideal budget?

I stopped going to Safeway and Fred Meyer. It took a while to find the balance between saving money, but still giving myself permission to go out for fun things sometimes. I go to Costco since buying things in bulk can sometimes cost less. I cut down on going to concerts, I bring my lunch to work, and I did a lot of at home entertainment. It took a while to figure out the balance.

What are your long-term savings goals?

I want to go on an international trip and visit Italy, Greece, and England. Also, I know it feels far off, but I want to have money saved for the down payment of my future home. It would be nice to have my student loans paid off and be debt free.

Have you had to make any adjustments to your budget since the shelter-in-place mandates?

I haven’t had to make a lot of changes to my budget actually. The option to have food delivered has been the biggest temptation for extra spending. I’ve become more conscious of my overall spending habits since my grocery expenses have been a bit higher these last couple of weeks. In that sense, I’ve had to put more of my normal budget toward groceries. I guess the money I would’ve spent going out to eat is now going toward my grocery budget.

What would you like to do after things get back to normal?

I’m looking forward to seeing friends again and spending time with them. I miss going out to dinner and seeing concerts with my friends. In fact, I was supposed to see Pearl Jam in San Diego in April, but it was postponed, and the rescheduled date hasn’t been announced yet.

How has SaverLife helped you dedicate money towards your emergency account?

SaverLife has helped me intentionally start saving. Instead of telling myself that I’d save and not follow through, SaverLife helped me dedicate time and effort toward saving. Since joining, I was able to save $1,000 in my emergency funds account. From only having $50 left in my savings in September 2019 to having $1,000 by January 2020, I was proud of how far I’ve come.

What does “living within your means” mean to you?

It means being in a place where I can pay all the bills and not worry where the money comes from each month. I still want to be able to have fun money for entertainment and clothes in addition to building my emergency savings. I’m in a good spot right now financially, so I don’t have to worry as much about paying the bills.

When I first moved to Seattle, it felt like half of my money went to paying rent. It’s not sustainable long term. When I got a promotion at my previous job, I was living a bit more comfortably, but I had to take a pay cut when I got the new job and I was paying more in rent at my new place. Basically, I was having to work with more expenses and less income.

What are you primarily using SaverLife for?

I am using SaverLife to help me rebuild my emergency fund. In 2019, I was unexpectedly unemployed for three months, and I had to use most of my savings to pay rent, bills, and other expenses while I looked for a new job. A month into my new job, I moved to another apartment, which depleted the rest of my savings.

How do you feel about SaverLife?

Using SaverLife has helped me set a budget to fit my new income and expenses so I can live within my means.

I am grateful for a program like SaverLife to help keep me focused on my savings goal! I still have a way to go before I reach my end goal, but several months ago, even saving $1,000 felt impossible.

The program has been really beneficial. It’s made me think about saving money and what I put into my savings. Having the weekly incentive from Scratch & Save has been great. It’s helped me turn my thoughts about saving money into a reality. It’s a good reminder to transfer the money and not just say I’m going to do it.